Take a virtual tour of the final resting place of the RMS Titanic and it is the everyday details – like the bathtub in the captain’s quarters or the cook’s pot in “Hell’s Kitchen”– that bring home the scope of this century-old tragedy. On April 14, 1912, the greatest ship of its time hit a fatal iceberg off Canada’s Newfoundland coast and 1,517 souls were lost at sea. A century later, the city of Halifax, Nova Scotia commemorates its role in the recovery effort. 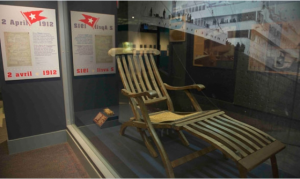 This April 14, 2012, at the Maritime Museum of the Atlantic, you can immerse yourself in the unfolding fate of the Titanic revealed through the same wireless messages operators received in 1912; (see Titanic on Twitter). From April to October 2012, the museum features Cable Ships: Connecting Halifax to Titanic and the World, which recounts the personal stories of crew members from the Halifax-based cable ships involved in the recovery of bodies from the site. The museum also features a photographic exhibit, An Earnest Price: 150 Grave Stories, showcasing the grave markers of the 150 victims buried in Halifax cemeteries. 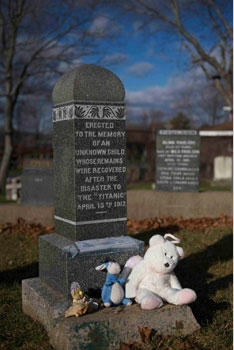 Graveyard to the unknown child (© CTC)

In the museum’s permanent exhibit, see one of the world’s only intact Titanic deck chairs and a new diorama offering a “lifeboat view” of the mighty ship’s last moments. The Halifax Regional Municipality publishes an online “List of Titanic Victims Buried in Halifax” that is helpful background information for those planning a guided or self-guided tour of Fairview Lawn Cemetery, where 121 of the victims are buried and visitors can view the marker “to the unknown child,” (since identified as 19-month-old Sidney Goodwin). Another 19 individuals were laid to rest at Mount Olivet Cemetery and 10 at the Baron de Hirsch Cemetery, open by appointment only.
From May through August, you can book a guided tour of the Bedford Institute of Oceanography, which includes a model of the Titanic as it looks today resting on the ocean floor.

Titanicmet its fate 603 km (375 miles) off the coast of Cape Race, Newfoundland and the province is marking its Titanic connections with a series of events created by Wildland Tours, including a dramatic recreation of the distress call and other ship-to-shore communications between vessels over the ship’s grave site. “My God, Gray, the Titanic has struck a berg” were the words memorialized by Cape Race wireless operator Jack Goodwin in 1912 and broadcast to the world. The Cape Race Receiving Titanic Commemoration, on April 14 &15, includes a 1912-themed on-shore meal and a minute-by-minute recreation of the events at sea 100 years ago.

In historic St. John’s, you can capture the feeling of grandeur from the Titanic’s era at Ryan Mansion, whose sweeping custom-designed grand staircase was built during the same time (1909 to 1911) and by the same Irish craftsmen who built the grand staircase for the luxury liner. The inn’s Titanic Dinners offer the six-course opulence of the actual last menu served on the ship, using china accurately replicated from the Titanic’s first class dining saloon.