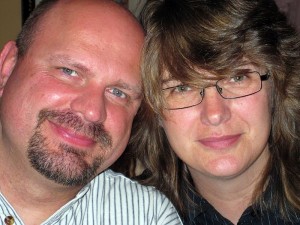 Joerg and Nicole Knoerchen during their trip to Nova Scotia. Contributed

Published on October 14th, 2010 by
Leanne Delong/Digby The Digby Courier

Halfway through a tour of Nova Scotia, Joerg and Nicole Knoerchen stopped to experience Bear River and Balancing Rock.

The Knoerchens are from Aachen, Germany, and entered the ‘I Love Nova Scotia’ contest through Nova Scotia Tourism, which required them to make a video explaining why they love Nova Scotia. They won with the most votes and worked with department staff to create a vacation customized to their likes and interests. The trip is valued at $15,000.

The pair visited Bear River on Oct. 1 for a wilderness experience with Stone Bear Tracks and Trails.

“He told us about the Mi’kmaw. Great story telling there,” while walking through the wilderness experiencing roots, berries and wildlife, said Joerg Knoerchen. 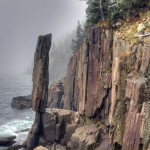 Their photographs at Balancing Rock were invaded by fog. Contributed photo

The couple also went to Balancing Rock near Tiverton, but ran into Fundy fog.

“Everything we like about Nova Scotia starts with the people, they are so smart, so friendly and I know they are proud of their province. There’s so much to experience, we like to hike and the food is awesome,” said Knoerchen.

Their trip began Sept. 24 in Halifax and from there the couple traveled the South Shore, through to Digby and Annapolis counties. Last Wednesday they were in Lower Economy, and later were off to the western side of Cape Breton. 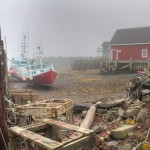 The Knoerchens ventured out to Brier Island as part of their trip around the province. Contributed photo

He said they are looking forward to a charter flight along the skyline in Cape Breton.

“At Kejimkujik National Park we have seen young Blanding’s turtles that hatched a few days ago. We also had a dark night experience at Keji but it was too cloudy to see the stars,” Knoerchen said.

Their trip comes to an end Oct. 23 but the couple are blogging about their experiences at http://www.novascotiablogs.com/author/joerg-knoerchen/

This is Knoerchen’s seventh visit to Nova Scotia and the fourth for his wife.

There’s so much to experience, we like to hike and the food is awesome. – Joerg Knoerchen