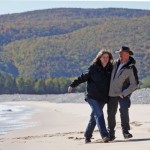 Joerg and Nicole Knoerchen walk the beach in Ingonish last week. The German couple has been travelling across the province for the last month after winning the trip through the Tourism Department’s ‘iLove Nova Scotia’ contest.

SYDNEY — It’s been a trip of a lifetime for a German couple thanks to a Nova Scotia government-run contest.

Joerg and Nicole Knoerchen have travelled from one corner of the province to the other.

From Tiverton, Digby County, where they saw the Balancing Rock, a large basalt column that appears to balance on its end on the southwestern tip of Nova Scotia, to a chartered flight over the western side of the Cape Breton highlands, they fell in love with the province all over again.

The couple first visited Cape Breton in the mid-1990s, and since then Joerg has made seven trips, while his wife has made four trips to the province.

“I stayed at a bed and breakfast in Creignish and the neighbour of my host was the father of Ashley MacIsaac, and he heard I loved Celtic music,” said Joerg, who works for a German travel agency.

“A few hours later he came back and gave me as a present two CDs from Ashley.”

Less than two weeks ago, Joerg was back in the community for a Thanksgiving Day Celtic Colours festival concert to watch Natalie MacMaster and her husband Donnell Leahy perform.

“It was such a beautiful thing to see them playing the fiddle and listening to the music. All the people were clapping with their hands and with their feet, and stamping on the ground. It was amazing.”

“The province is using creative marketing opportunities like this to attract visitors from key markets to ensure our tourism industry continues to create good jobs and grow the economy,” Paris said.

Joerg said he stumbled upon the contest on the Tourism Department’s novascotia.com website while surfing the Internet for pages related to Nova Scotia.

It required them to make a video explaining why they loved Nova Scotia so much.

Online voters decided the winner, and upon learning they had the most popular video, the Knoerchens worked with department staff to plan a four-week vacation customized to their interests.

The couple from Aachen, Germany, has been blogging about their experiences during the trip.

Above all, Joerg said the couple has enjoyed Nova Scotia’s fresh air and fall colours, and what appeared to be the abundant wildlife within sight of their back doorstep.

“We have seen one moose from the air and one moose in Baddeck in the backyard of a house,” he said.

Their trip began Sept. 24 in Halifax and from there the couple travelled to the South Shore, through to Digby and Annapolis counties.

They spent their last two weeks exploring Cape Breton, and will depart for Germany today.